As a result of the United States’ harsh drug laws, my Thai partner of 12 years can never enter the US again. There’s a waiver if you commit almost any other crime – including murder – but for an attempted $30 drug purchase in Tompkins Square Park, he is banned from traveling here forever.

We found this out at JFK airport, in November of 2012, where he was detained as we were returning from a wedding in Bangkok. I was waiting for him in the (now emptied) baggage claim area, but he never came out. He was put right back on a plane to Bangkok, a 24-hour flight.

Paisan is one of Thailand’s leading drug user rights activists, who helped bring peer-driven HIV and harm reduction services, including clean injection equipment, to the hundreds of thousands of people who use drugs there. We lived in Bangkok for 12 years doing this work, and had just moved back to New York City, my home. 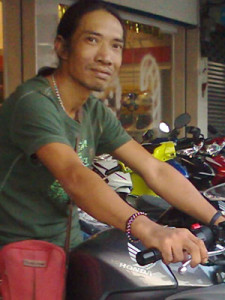 Just prior to this incident at JFK, Paisan’s original drug charge had been dropped in the NY court.  It was his first offense, and our criminal lawyer had told us (wrongly, we later learned) that it was fine to travel internationally. We happily went off to his niece’s wedding in Bangkok, and returned to New York to learn with horror that only I could come back in.

For months after Paisan was sent back, I had panic attacks and insomnia. He was also in total shock. He was like a member of my family, and like a limb of my body – it was hard to imagine life without him by my side. I tried to appeal to high-level government officials, and to a handful of lawyers, all of whom looked at me sadly and said they wouldn’t even take my money or the case, as they felt it was futile.

I know other wonderful people too, who for similar reasons (small-time, personal-use drug offenses) cannot enter this country. These laws are disproportionately harsh, violate basic human rights, and should be removed.